Gronkowski appeared this week on the latest episode of the ESPN “SportsCenter” special “Hang Time with Sam Alipour,” during which the New England Patriots tight end swam with sharks off the coast of the Bahamas in what looked like an absolutely terrifying experience. You could see the nervousness on Gronk’s face before he plunged into the ocean, and it only seemed to grow as several huge sharks swam right next to his face.Gronkowski called the experience both “insane” and “nuts” upon returning to the boat. 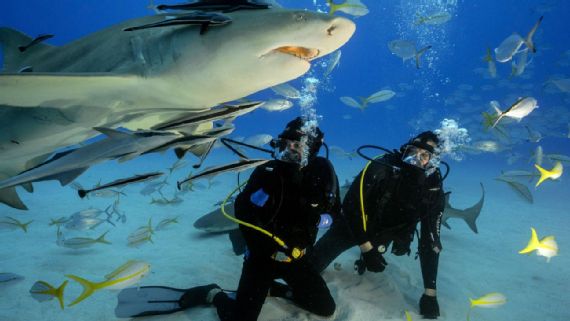 Not only do we get Gronkowski adrenaline rushes and facial expressions, but in typical Gronk fashion, he also gave us this gem of a quote in the written story: "I've never worn a wet suit before. If we pee ourselves, it'll stay in the suit, right?" The best is the underwater scenes as they experience shark diving and the tight end manages to use the scuba equipment to get in a classic Darth Vader line, saying, "I am your father."

It’s been a strange offseason for Gronkowski, who considered retirement after the Patriots’ Super Bowl LII loss to the Philadelphia Eagles and skipped organized team activities as trade rumors swirled. Swimming with sharks is a unique type of unsettling, though, and it probably makes a trip to Bill Belichick’s office feel like a walk in the park.