The wide receiver Julian Edelman has worn a bright yellow shirt with a blue streak along the sides under his No. 11 jersey in almost every practice during the past seven years — a testament to his love for the shirt and the Patriots’ equipment staff. According to ESPN’s Mike Reiss, the shirt bears the words “Kent State Football” and was delivered to Edelman by the school’s equipment manager Clifton Ragin while the slot specialist was in his second NFL campaign. 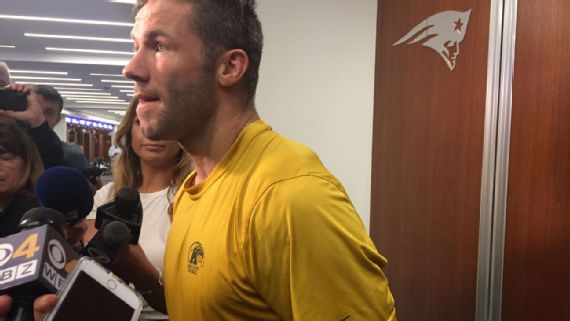 In college, he was a three-year starter at quarterback, serving as the Golden Flashes’ leading passer and rusher his senior year. Edelman noted that though he has a couple of other shirts, he uses the one with a splash of color for practice. The two-time Super Bowl champion, who will serve a four-game suspension to open his 10th NFL season, said the decision to start wearing the shirt wasn’t spurred by superstition, but by former teammate Wes Welker. “Wes used to wear his Texas Tech shirt, so I started wearing my Kent State,” he said. There might be another reason for the fashion choice: his 41-year-old quarterback’s eyesight. Then when Edelman makes his way to the interview area at training camp, or is surrounded by reporters at his corner locker after a practice, the flash of color is once again a quick giveaway of who has drawn such a large crowd.

“When people ask me about it, I always say, ‘What does Popeye say?’ I am what I am,” Edelman relays with a smile.

“I have a couple others,” Edelman says, “but this is my practice one.” “Nah, I don’t know,” Edelman answers. “Wes [Welker] used to wear his Texas Tech shirt, so I started wearing my Kent State.”

Only after a little prodding did another possible reason emerge for Edelman’s persistent devotion to the bright yellow shirt with the dark blue streak of color down the sides.